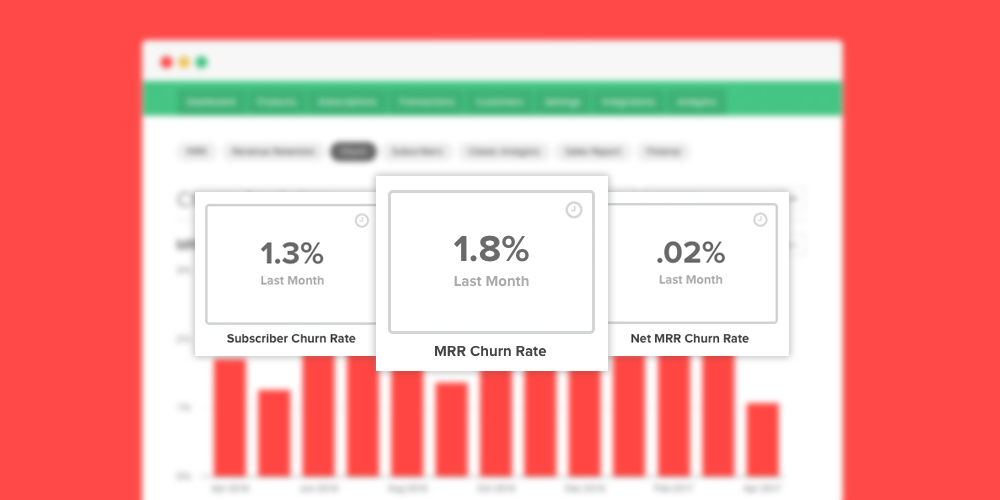 Not all churn is created equal. Before you can understand the impact SaaS churn has on growth and ways to reduce it, you need to understand the different types of churn and how they affect your subscription business.

In today’s post, we’re breaking down the different types of SaaS churn metrics, including:

But first, let’s start with the basics.

What is SaaS Churn?

It’s incredibly important for SaaS companies to continuously measure their monthly churn rate, as it helps identify valuable performance metrics that can be used for internal processes, such as growth and revenue forecasting, ARR, MRR, and renewal rates. Likewise, understanding the various reasons for customer churn further helps identify flaws in company processes and software functionality that can be improved.

Why Do SaaS Customers Churn?

Learning why customers churn is a vital component of any SaaS company’s success. Fortunately, when most customers decide to cancel their SaaS subscription, they’re often prompted to provide a reason for the cancellation. Some of the more common reasons SaaS customers churn include:

Though the above factors are leading causes of SaaS churn, organizations must remain mindful of specific customer feedback to stop the problem at the source and increase user retention. An analysis of this data allows SaaS companies to make ongoing adjustments to help reduce both monthly churn rates and annual churn rates.

How Do You Predict SaaS Churn?

Service tickets themselves provide insight into general user sentiment and the likelihood of finding an alternative solution, especially when analyzing the results of customer satisfaction surveys. Likewise, unless an internal or external event has impacted operations or SaaS functionality, previous months’ SaaS churn metrics can help predict future SaaS churn. While the overall goal is to reduce monthly churn, previous months can serve as reliable benchmarks for improvement.

What to read more? Get Data-Driven Pricing Strategies.

In the world of SaaS, there are multiple types of churn metrics an organization can calculate. Here are the various avenues of SaaS churn calculation you can take.

Subscriber Churn Rate, or Logo Churn Rate, is the rate at which your subscribers are canceling their subscriptions.

Example: If you had 200 subscribers at the start of the period and 10 subscribers churned during that period, the Subscriber Churn Rate would equal 5%.

Close.io CEO, Steli Efti, explains why Subscriber Churn Rate is particularly valuable to early-stage startups: “Just because customer churn is simple doesn’t mean it’s not useful. It’s probably the only measurement a startup needs to address retention in its infancy.”

In the calculation above, dividing 1 by our Subscriber Churn Rate of 5% indicates the average customer lifetime for that business is 20 months.

“When used in forecasting, SaaS [subscriber] churn can be interpreted as the probability rate at which customers will cancel their subscriptions.”

MRR Churn Rate is the rate at which monthly recurring revenue (MRR) is lost from canceled subscriptions of your existing paying customer base (excluding new business).

In comparison with the Subscriber Churn Rate, the MRR Churn Rate is a financial metric which shows the impact of churn on revenue for your SaaS company.

“If you charge per user or have different pricing tiers, revenue churn lets you put a dollar amount on what churn is actually costing you, and at what velocity. Revenue churn can be drastically different than customer churn, and will often tell a completely different story.”

For your own SaaS, you’ll also want to analyze MRR Churn Rate to see if lower MRR customers are churning or if you’re losing high MRR customers, which will have a bigger impact on your revenue.

MRR Churn Rate can also help you understand if those losses are manageable, especially when you compare it to the MRR associated with new customers you are bringing on each period. As you move forward and your business begins to grow, it can even help you forecast future revenue performance.

It is important to track MRR Churn Rate early on in your SaaS company’s lifecycle. It may be tempting to focus on new MRR growth in the beginning, but MRR can be steadily growing at the same time MRR Churn Rate is high (or increasing).

Think of MRR Churn Rate as a sort of early-warning system for your SaaS business. By tracking your MRR Churn early on, you can identify problems that may not show up right away if you’re just tracking MRR, giving you time to pivot before your company goes bust.

Gross MRR Churn is the sum of MRR lost from both canceled subscriptions and downgrades (contraction).

Similarly, the Gross MRR Churn Rate is the rate at which MRR is lost from both canceled subscriptions and contraction.

Some SaaS industry experts consider these metrics a more “honest” look at the health of the business because Gross MRR Churn metrics don’t “sugarcoat” the numbers by including expansion MRR (which is included in Net MRR Churn, below).

“Lots of churn definitions out there. It all boils down to a low Gross MRR Churn indicating if a business is healthy. Net MRR can be ‘improved’ by expansion, but if the Gross MRR Churn is above 1-2% there seems to be an issue with the product or the ROI story.” — Alexander Bruehl, Founder of SaaS Garage

Low Gross MRR Churn helps indicate a healthy business and is one of the metrics potential investors pay attention to.

How do you determine the acceptable Gross MRR Churn for your own SaaS company? Retention best practices state that the metric should remain below 2%. However, your own metric should be as low as possible. For example, your Gross MRR Churn Rate is too high if you ended the year with a lot of new subscribers but approximately the same amount of revenue.

Net MRR Churn is the sum of MRR lost from canceled subscriptions and contraction plus MRR gained from expansion (upgrades) and reactivation (canceled accounts that come back).

Another important metric is Net MRR Churn Rate, which is the rate at which MRR is lost (or gained) from canceled subscriptions and contraction plus MRR gained from expansion and reactivation.

Net MRR Churn metrics combine both unhappy (churn/contraction) and happy subscribers (expansion/reactivation). These metrics give you the full picture, so you can see how you’re succeeding and failing.

Because Net MRR Churn metrics include “cross-sells, up-sells, organic growth within a customer account, and price increases” they’re important as broader metrics “which tell the story of what would happen to a SaaS business over time if it did not acquire any new customers,” according to Todd Gardner, founder of SaaS Capital.

It is important to note Net MRR Churn Rate is the only churn rate metric that can be negative because it is calculated using Net MRR Churn. Negative churn indicates the value of your existing customer base is growing without factoring in any new business.

Tomasz Tunguz, Managing Director at Redpoint Ventures, has a great post on negative churn (definitely worth the read), and he gives the following example of a company that has achieved 5% negative churn.

The company may lose “5% of its customer base each month, but the remaining 95% of the customers grow their spend with the startup by 10 percentage points, so the total revenue from the cohort is equal to 105% of the revenue from the previous month. Like a savings account, each month, every cohort becomes more valuable.”

Even if you’ve achieved negative churn or a low net churn, there is always room for improvement “because gross churn can be a more accurate measurement of how your SaaS tool and customer success team is working,” reminds Jesse Pärnänen, Business Development & Partnerships Manager at Leadfeeder.

What is a Good SaaS Churn Rate?

What is a Good SaaS Retention Rate?

Why is Churn Such an Important SaaS Metric?

Learning the various SaaS churn calculations and applying them to your business is a vital part of maintaining a strong and successful SaaS operation. By understanding how many users cancel their SaaS subscriptions each month, churn rate allows for more targeted efforts when it comes to revenue and growth forecasting, as well as ramping up marketing efforts for specific audiences.

By learning how many customers will churn, companies can better calculate expected monthly cash flow to prompt smarter decisions when reinvesting in the company or planning appropriate overhead. As for growing the business, comprehending SaaS churn rate also allows company operators to identify flawed areas of operation.

Whether the churn issue is due to pricing, competitors, or poor product/market fit, efforts can be made to address such concerns and further reduce monthly and annual SaaS churn rates.

Using our Subscriber & Churn Analytics features, Chargify users have clear insight into the health of their customer base and the various churn metrics described in this post. Schedule a demo to learn more on how Chargify can help grow your SaaS business or sign up for a 30-day guided trial to try it out for yourself today.