REVOPS AND MARKETING: HOW THEY’RE RELATED, WITH PROOF’S DAVE ROGENMOSER

Welcome to the first episode of RevOps and Hops, a show that breaks down everything about Revenue Operations while enjoying some of the best hops around. Sit down with Chargify CTO Michael Klett and I, as we unravel the mysteries of RevOps.

In this episode we discuss the relationship between RevOps and marketing with Dave Rogenmoser, CEO of Proof, and how it’s not just marketing or sales anymore—it’s about helping.

You can listen to episodes of RevOps and Hops on Apple Podcasts, Spotify, or wherever you listen to podcasts. There’s also a full video version below so you can pick and choose your own journey. 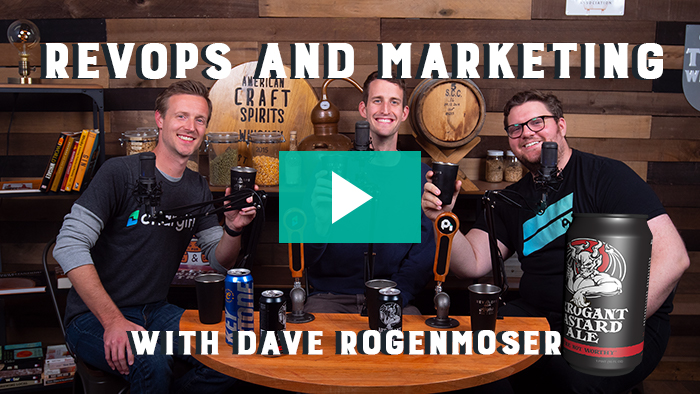 Before diving headfirst into the relationship between RevOps and marketing, we crack open a few frosty ones with a beer-based marketing story.

Recently, the Stone Brewing Company filed a lawsuit against Keystone Light claiming their new branding—the word “stone” prominently on the front of their packaging—was confusing customers. They felt that customers could mistake Keystone Light with Stone beer. And immediately after filing, the Stone Brewing Company produced a video announcing its lawsuit.

However, these two beers are from opposite ends of the spectrum. Arrogant Bastard Ale is a very aggressive and hoppy beer, as it states right on the can: “This is an aggressive beer, you probably won’t like it.” Whereas, Keystone Light is a very light lager.

So, does turning your lawsuit into a marketing viral video make sense?

I think you have to do it the right way. It works every time, but only for certain audiences.

Dave feels like it very much fits their (Stone Brewing Company) brand. “They’re arrogant and punchy,” and so that video makes sense for their brand, but it wouldn’t work if Keystone tried to fire back in the same way.

Dave is the Founder and CEO of Proof, a two and a half year-old company founded in Austin, Texas. Originally a bootstrapped company, Proof offers social proof marketing on websites.

Companies integrate their websites with Proof and visitors are able to see live notifications of what customers are doing on their site. Simply seeing a notification saying “seventy-two people have signed up” for said product, makes you think, “if they did it, I should do it too.”

When Dave first started Proof there was only one other competitor on the market. The goal was to craft the term “social proof marketing.” The product started off as a widget but the vision was so much more.

The simplcity of the product eventually led to more competitors developing—although later in the game—and overusing the word “proof” within their companies. Dave sees himself and Proof as the “top dog” so when it comes to competitors, he doesn’t take too much stock.

Michael adds that the whole reason Chargify started was because there wasn’t a good off-the-shelf billing solution. For Michael it was clear that subscriptions were going to be a thing, although subscriptions were geared towards B2C and nobody really knew the extent to which B2B would move to SaaS.

The question of ethics and accuracy is brought up when recording and showing the number of people signing up for a product. Companies tend to fudge the numbers to imply a greater number of visitors or subscribers. Dave argues that in order to build a long-term business, you have to be truthful and provide accuracy. The goal is to have people trust you, “because if they stop trusting you, you won’t have a business anymore.”

Dave is currently launching a new product called Smart Journeys. He already has around 3,000 customers using his current products so the question remains, when you’re pitching your new product, do you tell people you already have current users—those who are already customers?

Here at ProfitWell, we learned very quickly that it was best to be transparent and straightforward when launching a new product and let customers know they’re going to be some of the first users. The reality is the whole “fake it ‘til you make it” is bad advice. Transparency goes a long way.

Michael points out that the relationships you make at an early stage are going to be the ones that last. You need to be transparent with your customers.

It leads us into message personalization and customization for your customer.

The second is a more subtle version of personalization where users don’t even know it’s happening through super relevant messaging, leaving them with a feeling that this website is built for them.

Dave says they’re still exploring what customers want, but he likes the in-your-face approach because it’s viral for them.

We all agree that instead of targeted advertising, identifying a customer for who they are and what they are interested in is better. Michael puts it this way: “We’re not following you, you are coming to us and we’re tailoring the experience for you.”

For Dave, marketing is not just about the very front end and getting the conversion, you need to take the full customer lifecycle into consideration—namely, what RevOps is doing.

“We think of SaaS growth as a flywheel, not a funnel,” says Dave. The flywheel idea consists of signing people up, activating them, engaging them, then referring them to restart the entire process. But as Dave explains, it’s hard to find the person in the company who cares about all of this. In a lot of small companies it is the CEO that thinks this holistically and acts as the RevOps person.

So, the next logical step is to put someone in place to look after expansion revenue. Michael mentions having someone in place who has spent time in customer success and in sales where most of the expansion revenue derives from, rather than someone who cares more about forcing the upgrade that could then lead to a bad relationship, or even churn. Customer success and sales people are more interested in the customer obtaining the correct outcome.

Proof is currently selling to marketing—head of growth—but what makes a company and product really stand out is its flexibility and the way it can be applied to other teams within an organization. Dave sees product teams using his tools. He recognizes that there’s a space to implement Proof within websites that recognize when someone is visiting that space frequently. There’s a lot more opportunity out there than just “signing people up. And no one is utilizing that yet.”

We all agree that SaaS companies use too much SaaS themselves, too many tools. It’s overkill. I believe we’ll hit a critical mass on SaaS, but after that, people will refine products and make them better to a point where we, as users, won’t care as long as we’re paying for what we’re using.

With such a saturated market, everything is becoming more value based. But the only way we know that is through measuring value in some way. If you look back five to seven years, there were only about 15% of SaaS companies using a value metric. Today it’s up to 40%. If we can measure by per-use or per-hundred visits, we can then put a price on it.

Dave’s value metric is how many visitors arrive on the page. His ideal metric would be some percentage of lift. It’s tough to track, which will lead him to find a proxy for it. What he’s hoping for with his new personalized product is to charge for the number of times someone loads or views a page where they see the personalized experience. They’ve been able to grow as an organization by only talking about the value they bring.

We hope you enjoyed the first episode of RevOps and Hops. Over the coming weeks, we’ll be covering everything you need to know about revenue operations in an aim to drive more alignment across revenue-driving functions. We’d love to hear your feedback, so let us know what you think about the new show on social media using #revopsandhops.