RevOps and Pricing with Robert Cortese of SolarWinds

In this episode of RevOps and Hops, Robert Cortese, Director of Pricing and Product Strategy at SolarWinds joins us to chat about the similarities between RevOps and pricing.

You can listen to episodes of RevOps and Hops on Apple Podcasts, Spotify, Google Podcasts, or wherever you get your podcasts. There’s also a full video version below so you can pick and choose your own journey. 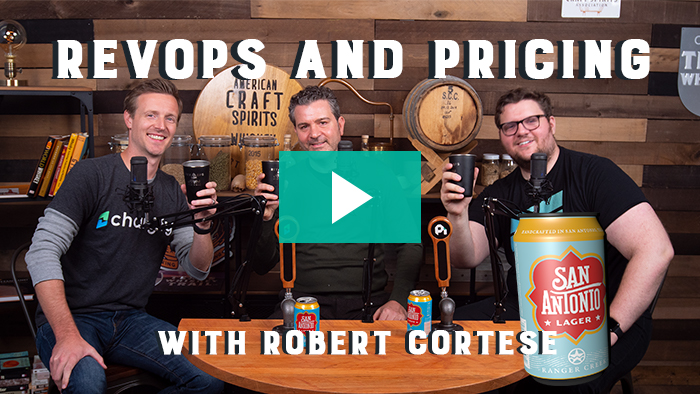 Oftentimes when people travel, they’re unsure of what to drink when they’re out. So, to help with that, Michael says to drink local. And we’re doing just that. This week we’re on location at Ranger Creek Brewing, and befittingly, Michael breaks down the hops on the San Antonio Lager from Ranger Creek Brewing.

This beer is crisp, light, and as our guest Robert puts it, “effervescent.” It’s a pale lager, the most popular style of beer across the globe. Nine out of 10 beers are this style. And I wouldn’t say this to the brewer, but this San Antonio lager reminds me of an upscale Bud Light.

Robert adds that lagers are a more recent form of brewing. Brewing has been around for thousands of years, but lagers are only a few hundred years old. He says that he brings that up because, well, “RevOps is a revolution.”

Robert Cortese is Director of Price and Product strategy at SolarWinds, an IT management software organization with 300,000+ clients. Robert calls himself a “pricer” and has been doing that for a couple of decades. However, he started his career at Disney working on films.

SolarWinds provides, creates, designs, and markets IT infrastructure management solutions software to help IT professionals do their jobs. They are affordable and very powerful with 60+ products and a giant customer base (275k), so there is a lot to manage from a RevOps and pricing standpoint.

Robert talks about his experience at Disney, and explains that they know their DNA. He elaborates that this is important when it comes to pricing because we do a lot of work when it comes to value, and to come up with a range. But if you don’t know your DNA, you don’t know your value and what you can price for. For instance, Disney knows they are a premium product and they know the price they’re setting can influence a child’s experience on a ride at the park. “It’s not just what the price of this Pixar film is. It might be, ‘how do we want to reflect value over the history of the company for decades to come?’”

Although it’s been a while since Robert was a part of the Disney family, I wanted to hear his thoughts on Disney’s latest and greatest venture in subscription.

He expresses that technology and the subscription revolution have changed things completely. Disney is offering up all of their content for six or seven dollars—this would never be possible 10 years ago. The subscription model is no longer looked at as non premium, it’s looked at as a valuable addition to a brand.

I mention that SolarWinds is the Disney of IT software, and I ask how they deal with 60 products and pricing them properly. While at Disney, Robert was a product manager over catalog films (films that are no longer in the new release window). He explains he was “vertically integrated” to only selling one type of product. At SolarWinds he is much more “horizontally integrated.” He’s called upon to consult about all the products his company is pricing.

Robert works very closely with product managers who have an extraordinary background on the product. He may just consult with them, or they may bring in ProfitWell for more extensive research to understand the product’s value. In other cases they may just be verifying suppositions they’ve had for a while.

Michael asks how the legacy of existing pricing plays into it, since SolarWinds has acquired companies and products in the past, with pricing that already exists. Robert reiterates the importance of “knowing your DNA.” By stating that SolarWinds is powerful and affordable, he’s already looking at a range of prices that give him a great compass, as far as what to do.

How does Robert Define RevOps?

“Things move much quicker now than they ever did, and those things need to be acknowledged. And the term RevOps is an acknowledgment that things are moving extremely quickly and we need to align better,” Robert says.

He also mentions that pricing is multifaceted like RevOps, and you need buy-in from multiple teams. You end up talking to everyone. He says that it’s become a forum where you’re bringing different teams together. It’s all about clear communication, a theme we’ve seen throughout this series. He says that we have now acknowledged that we need RevOps.

How do you structure pricing with multiple products?

I ask Robert how they go about their pricing structure with SolarWinds being a large company and having a high number of products. Robert explains that there are products that are an absolute priority, and there’s a top-down message maintaining that. But more often than not, with that many products, things will “come at you.” So, he’s created a formal intake process. But he also likes to personally reach out and gather information on the product and what’s really important. He adds, “Communication, tons of communication.”

Prioritization also comes into play. Robert explains that there are things he wants to get involved in, but waits until it is brought up enough times showing that people are ready to review and discuss it. Robert expresses that. “At the end of the day you need to make sure the organization has the appetite to take a look at something that may have been a winner in the past, and pivot it on that.” He says there’s risk in that, including switching costs and operational challenges. But as long as the organization is open to change and its expectations are managed, and there’s an understanding that not everything will get done right away, then it works.

What metrics does Robert look at?

Robert conveys that it may be cliché for a pricer, but the number one metric is value. How do you get to the value? There’s a lot of ways that we’ve done that, but the way we go about it now is by developing customer personas. What is the quality of these people, who are they, why are they buying, and how are we solving their problems? The most difficult to decipher is: What is their perception of value? This is where surveys can be helpful, because you have to talk to the customer.

Robert says that, “At the end of the day, value is made up in our minds. It’s a very elusive thing.” People pay five times more for a Tiffany diamond, because of the blue box—a very consumer-oriented example, but it happens in B2B as well. It’s that value perception—B2B organizations want the best and pay for it. The understanding of your value is extremely important.

Robert indicates that one of the most important aspects of that value lever is in the company’s DNA, and where you want to sit within a range. “Are we affordable, or are we premium?”

Another value benchmark Robert looks at is competition-based pricing and how they value themselves. Now, there is some danger in this method because your product is not your competition’s product, but it does give you a pulse check on the market. He’s been in meetings where they have looked to other companies and it has informed a packaging decision.

His final point on value refers to developing a product that is essential to the portfolio. But in order to get people invested, you have to develop a lower barrier of entry, i.e., pricing tiers. You’re not devaluing your product because eventually your customer will reach that higher tier. You’ve created a gateway to get in.

How does operations deal with big changes?

Robert says it’s the first time in his career where he can work on strategy, and help other teams make decisions. “It all comes down to clear and effective communication,” he says. He can certainly bring a pricing strategy to the table but his operations team will also provide input and inform on changes. You have to have those conversations initially—order of limitations.

If you’re unaware of Disney’s “vault,” it’s a sort of moratorium for Disney animation films. After a film had been released and made available for purchase, Disney would essentially stop selling that film until its next re-release. Michael was interested to know if this created value for Disney?

Robert explains that many years ago Disney understood that these products could become perennial favorites. They’re high value. By making them scarce, you could bring them back and sell them all over again. You can see that same practice today with the two biggest brands to recently join the Disney family: Star Wars and Marvel. Nostalgia sells.

Is there a vault equivalent in the SaaS world?

B2B is very different. You’re offering a service, not a novelty. People depend on your product and that’s where the real value comes in. Putting a feature or a product in the vault is not ok.

What does happen is value migration. It’s a concept that value doesn’t disappear, it migrates to another place. For instance, we used to spend $20 a month on entertainment like DVDs, and now we’re spending $200-$500 a month on pipes, so we have access to this content. The value of entertainment never went away, it just migrated and we’re paying more than ever.

How did Robert get to where he is today

For a while he was convinced that the airplane needed to be reinvented. That morphed into a love of music. He was in music for a long time (singer and guitar). He moved out to California to play, and wound up in film production working on commercials and music videos, one of which included Eminem and Dr. Dre. Needless to say, he says that was a really cool experience.

Robert explains he didn’t always take into account the dynamic of the teams and how comfortable they are with the product, so now he’s incredibly sensitive to it. As the Director of Pricing and Product Strategy, he needs to take every outward facing team into consideration when making a change—he’s the chief diplomat.