Measuring the Success of RevOps with Armando Biond

Episode five of RevOps and Hops is all about measuring the effectiveness of your RevOps strategy with Founder of AdEspresso and MailUp, Armando Biondi.

You can listen to episodes of RevOps and Hops on Apple Podcasts, Spotify, Google Podcasts, or wherever you get your podcasts. There’s also a full video version below so you can pick and choose your own journey. 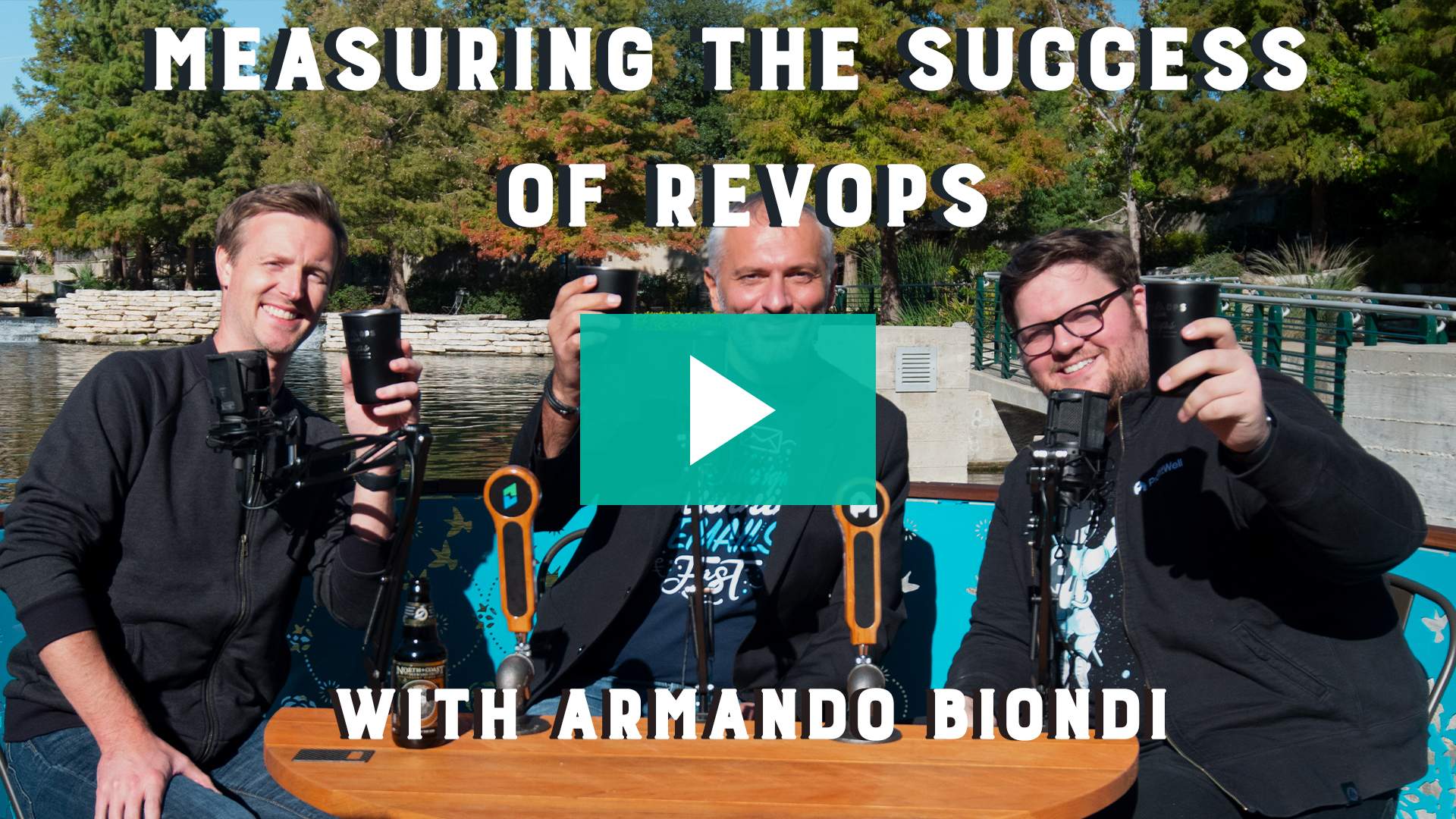 You look at three distinctive characteristics when measuring beer: the color, the bitterness, and the amount of alcohol (ABV).

The darkness of a beer usually tends to correlate with its heaviness. The bitterness comes from the amount and kind of hops, as well as the point at which they are added in the brewing process. The alcohol comes from the fermentation process. A light lager usually hovers between 4% and 5%, while IPA’s and other beers will scale higher.

This episode calls for a beer that is vastly different from those that were consumed in the past:

North Coast Brewing Company’s Russian Style Imperial Stout Old Rasputin. This beer is dark in color, high in alcohol (9%), and is an old classic. The beer exudes a coffee flavor that actually comes from the dark roasted malts, rather than actual coffee beans. When referring to a beer as imperial, we are referring to the alcohol content, not the empirical nature of the beverage.

Founder of AdEspresso and MailUp, Armando Biondi is a true serial entrepreneur with plenty of experience in tech, including being part of HootSuite’s leadership team. Armando grew AdEspresso from zero to 50 people and successfully sold the company to HootSuite. Today, he is the Chief Growth Officer for MailUp, an email marketing software company that has over 10k customers, $60 million in revenue, and is publicly traded on the Italian stock market. The best comparison he can make is that MailUp is the European Twilio.

The different meanings of growth

“When you think about growth, at the end of the day there is an outcome to it, which is revenue growth, and everything needs to come down to that.”

Armando makes a great point that growth can have different meanings depending on the stage at which the company is at. Growth has a gravity to it, and tends to slow down over time. As absolute numbers grow, the relative percentages diminish. It’s natural, and it happens to all companies.

Companies find a path forward with a go-to market strategy, the right product-market fit, and the operational infrastructure to make it work. That structure holds for a while and bridges you to the next milestone you’re aiming for. But over time, the structure that was once put in place will start to break as things change. Things that had been working for a while, won’t anymore—and in fact, will start to work against you.

“In essence, you have to start all over again, redefine what you’re aiming and optimizing for as an organization, and rebuild, looking ahead to the next milestone of growth.”

Armando explains every company is looking ahead to the next stage, before they even get there.

Growth is a function of traction

A question Armando constantly asks is, “How long will your growth last?” He claims you can engineer growth as a trajectory. Knowing that something will break at some point puts you in a position that you can start working for the future. And when that growth trajectory starts to slow down, you have an arsenal of things you validated in the past that can be executed to sustain and tilt that trajectory.

Armando points out that a lot of the successful tech companies have inflection points where their growth slowed, and had to make adjustments accordingly. He mentions Slack, HubSpot, and Facebook, just to name a few. “It’s not a linear progression, there are times when the trajectory changes and becomes steeper,” Armando said. The more you can foresee and prepare for, the better your growth will be. Growth is a function of traction—how much progress you generated per unit of time.

How to optimize time and efficiency

There’s continual debate on how fast you should grow your company. A lot of VCs like to see companies grow as fast as possible, but with high and fast growth comes pitfalls.

It is possible to grow fast and grow profitably, but it’s rare. The vast majority of companies that are created every year are not cash retentive—only 5% are. Which means these organizations need to be cautious when accepting VC money.

Slow periods of growth are normal

Not a lot of founders will talk about the lack of growth or slow down of growth a company experiences. Armando says it’s ok to have a period of time when you’re not doing as well as you wanted. “The majority of companies who are growing fast will start hiring aggressively because they raised capital, but will experience layoffs because they did not expect a slow down/dip in growth,” Armando said. It’s part of the lifecycle of a company and there’s always pain in growth.

Michael points out that when you hit those flat sections of growth, you need to know why. If you don’t know why, it weighs on the entire company. But if you understand why your growth has leveled, and you can point to it, it’s all the more likely you can step in and make the correct adjustments.

RevOps at the intersection

Armando brings up a term that we’ve talked about before on the show: silos. He says we used to think of different teams and departments as separate entities that performed almost independently from each other to get to a shared outcome.

When you think about it, zero communication and working separately, but trying to get to the same outcome—it just doesn’t add up.

However, things are changing, and we’re witnessing an evolution. Armando refers to these growth revenue-type roles as “C-level titles working at the intersection” of different departments.” Armando claims he is at the intersection of product marketing, business development, operations, and growth.

“How you think about the full funnel is how you set up the data infrastructure so that you can actually make good decisions by looking at data that is relevant…a lot of people make bad decisions because they look at bad data.”

This metric stays the same along the way, but the way you get there and the relevance of the underlying metrics is very different over time. A great example would be an early-stage, pre-revenue startup. They shouldn’t look to optimize for revenue, they should look at engagement metrics, NPS, and qualitative feedback. As you start generating revenue, you should start to optimize for those repeat customers and start to really think about retention, as well as acquiring more customers similar to the ones you already have.

Doubling down on creating the right customer profile and building repeat business is essential. Once you arrive at a couple million dollars in revenue, you’ll begin to look at acquisition metrics, CAC, LTV, and overall efficiency across the board.

The difficulties of prioritization

Knowing what metrics to look for and focus on can be difficult, especially when every little detail matters to you (especially founders). You’re consistently restrained in terms of how much capital, resources, and time you have available.

As Armando says, “When you have capital available and you can spend, you still must spend in a way that makes sense.”

We can also take a look from an engineer’s perspective, and what features and aspect of the product takes priority at an early stage. Certainly, in the beginning the goal is to build, build, build. Develop a product and once you’ve built it, the next stage is to maintain it, look ahead, and attempt to innovate.

You’re not going to be that unicorn

I’m very aspirational and ambitious, but Armando makes a great point: There’s usually only one company that comes around every decade. We all know them: Facebook, Uber, etc. But you need to get the idea that you’re going to be one of those companies out of your head right away, so you can focus on what you really want to be.

Michael makes a point that you can brew your own New England IPA or imperial stout, but you’ll be standing on the shoulders of the beers that came before. However, you should own what you make.

It all comes back to finding the right balance. As an entrepreneur you have to think unconventionally and control your emotions, to then implement the conventional things you need—essentially as Armando put it, “picking your fights.”

Armando explains that “being special in every way is too much work.” Be the best at one or two things and create a demand or necessity for those functions.

A school for at-risk youth, a flight attendant, and a beer farm

Running a company is no walk in the park. You commit and devote yourself completely. And you become so involved that sometimes you forget to think of what’s beyond it. Armando reminded us about the future outside of tech and what that might look like, by asking: What comes after tech?

We have some great answers…

Personally, I’d love to start a school for at-risk youth. Some may see it as that standard move after tech, but I want to help others be successful. In another world, I would also like to be a flight attendant for six months. Sounds crazy, I know. I also travel all the time and I hate lines, so I’d love to solve the constant line problem that exists with travel. And it would be fascinating to be in a service industry because you learn so much about human nature.

Michael mentions, if he wasn’t in tech he would own a small farm with a restaurant attached where he’d grow ingredients to brew his own beer, and develop a farm-to-table menu.

What’s next for Armando?

Armando says he plans to be in tech for the next 15 years. When that time arrives, he’ll be in his late sixties and like all good Italians, he wants to return home to the motherland and eat good food. Mangia!