Optimizing, Automating, and Outsourcing: The Secrets Behind Leverage’s Explosive Growth 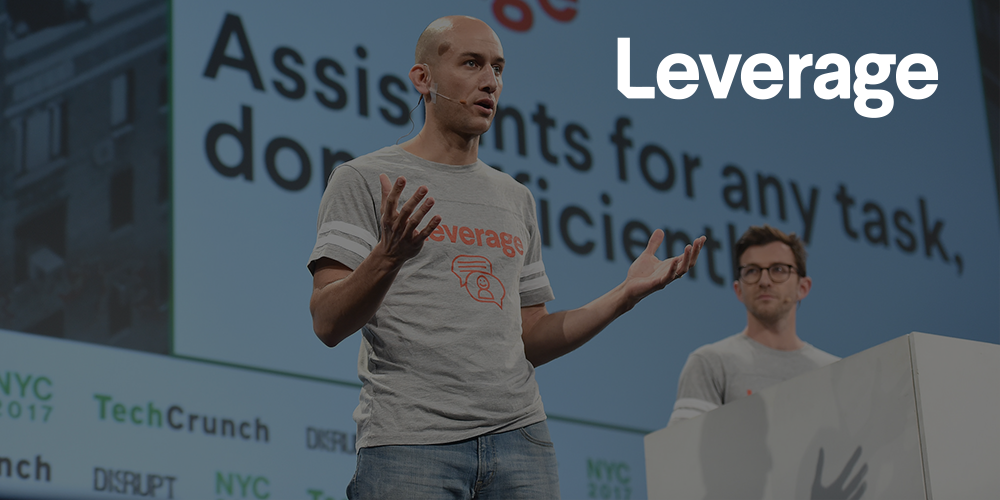 This blog post is part of our Customer Spotlight series. Throughout the series we highlight Chargify merchants and the lessons learned as they grow their subscription-based businesses. NOTE: Leverage photo (above) by Noam Galai/Getty Images for TechCrunch.

Sitting on hold with customer service. Devising an automated lead generation system for your business. Tracking down lost luggage. Figuring out how to streamline the hiring process for your company. For most people, these activities belong to an already long list of “things I would rather not spend my time doing but have to.” Now you don’t have to.

Leverage has created a business out of allowing you to focus your time on what you do best, and outsource the rest to industry experts. As an on-demand outsourcing platform, Leverage allows individuals and businesses to outsource anything (yes, really!) in order to be more effective in their own lives and businesses.

Co-founders Nick Sonnenberg and “Art of Less Doing” author Ari Meisel built Leverage out of a personal need. They were looking for virtual assistants (VA’s) they could outsource any task to, regardless of the complexity, with full confidence the project would be done right.

“There was nothing in the market that was high enough quality for our standards,” says Sonnenberg. So, over dinner one night, Sonnenberg and Meisel formulated what their dream virtual assistant company would look like. Then they built the core infrastructure of the company (initially named Less Doing) within the following 24 hours using free tools (zero overhead costs!).

Yes, you read that right. A startup built in 24 hours with free tools.

How did they do it? We sat down with Leverage’s co-founders to learn how they started the company in such a short period of time and their secrets to 10% month-over-month (MoM) growth. Their story is a must-read for every entrepreneur.

Leverage was built in 24 hours and without investing any money into the startup. To this day, all of the company’s success has been achieved “with absolutely zero internal or external funding,” states Meisel.

The co-founders accomplished this seemingly impossible task by using readily available free tools such as Trello and Slack rather than attempting to create custom solutions.

A lot of startups fail because they don’t get their systems and assumptions set up correctly to begin with. They waste time and resources circling back, trying to undo early mistakes. As experts in efficiency tools and apps, we used off-the-shelf tools rather than developing a custom solution, and we are still using those tools to this day.

During the company’s early days, the co-founders were the virtual assistants who were tackling projects and communicating with customers in order to really understand the business and every job involved. The hands-on learning also helped them identify what traits they would need to hire for and how they would train new team members.

The turning point for Leverage happened a few years ago, when the co-founders were invited to speak at the Genius Network Event. The Event is an annual conference of successful entrepreneurs. The presentation was such a success, more than 60 new clients signed up and the co-founders processed $25,000 in charges to the new clients on the flight back from the conference!

Luckily, only a few of the new clients wanted to get started using the service right away. Sixty new customers added to Leverage’s workload in those early days would have been incredibly difficult. Instead, the company had a couple of months to ramp up operations in preparation for the surge of new clients.

Like any startup, they’ve experienced growing pains along the way…

The co-founders were already experts in efficiency when they started the company, but there were still processes they did manually in the early days. The difference is that where many founders struggle with how to automate their business processes, Meisel and Sonnenberg excelled.

Customer onboarding. Leverage’s goal is to provide a white-glove service; providing a superior, seamless experience from start to finish is critical. In the early days, some clients expressed confusion about how to post a task and complained they were receiving too many emails. Meisel and Sonnenberg knew onboarding improvements were needed.

They realized improving automation was key to streamlining user onboarding. “Now, Chargify is at the center of all our automations.  Using Chargify’s API, when a client signs up via Chargify it triggers over 10 automations to set that person up as a client and get them onboarded,” explains Sonnenberg.

These are only two of many examples — automation plays a key role in everything Leverage does, both internally and in the solutions they provide clients.

Those charges they processed on the flight home from the conference? Leverage’s co-founders collected the credit card information and manually entered all the information into their payment system.

The process was tedious, unsecure, and lacked abilities such as dunning (the process of communicating with at-risk accounts in order to retain revenue) and being able to easily upgrade or downgrade a client’s plan.

Soon after processing the payments from the conference, the co-founders automated payment processing and began using Chargify.

Automating recurring billing and subscription management benefitted both Leverage and their customers, who experienced a better user experience once they could easily login to their own account and update their plan or billing information.

Chargify also has a wide variety of capabilities you don’t know you need until you need them, such as dealing with expired credit cards by notifying the client automatically. It allowed us to upgrade, downgrade, or cancel a client’s subscription easily. There was a self-service page, which allowed clients to update information on their own. It provided metrics month-over-month on critical data such as the number of customers, revenue, and lifetime client value. It also protected us because it only allowed us to see the last four digits of someone’s credit card, so it killed several birds with one stone.
Nick Sonnenberg, Co-Founder of Leverage

Looking back at their own experiences, Sonnenberg has this advice for new subscription-based startups: “Start with Stripe + Chargify.  You’ll save time and money in the long run.”

The majority of Leverage’s new hires come through referrals. According to Meisel, the company doesn’t actively recruit unless they’re searching for a specialist such as a graphic designer.

They got the whole process down to 3 hours! You can read all the details in Meisel’s post How We Automated Our Hiring Process in 3 Hours. Using Process Street, they’ve continued to optimize their hiring process for the utmost efficiency.

New hires gain access to all training material via a Trello board. They’re also automatically added to a training Slack channel where they work on real tasks while interacting with other team members. After a 2 week trial period, the company has learned enough about the new team member to determine if it’s a good fit.

If the trainee isn’t a good fit for Leverage, even the offboarding is automated. Their corresponding Trello card is archived, triggering Zapier, which automatically sends an email wishing them good luck.

In the process of scaling the team, the co-founders experimented with a variety of different team structures. One early experiment was “pod leaders.” Employees were split into 3 groups, with a senior VA put in charge of each group. “Within four days, it started to look like a terrible idea. We took people with no management experience whatsoever and tried to turn them into managers, which didn’t work,” admits Meisel.

They also tried moving from a distributed team structure to a traditional office. The experiment lasted for one month and was determined to be a mistake; it just wasn’t a fit for a company that needed a lot of flexibility.

Leverage now consists of over 100 team members, divided into groups based on their expertise (i.e. “Design” or “Creative Services”). Each vertical is overseen by a senior team member, with experience in management and Leverage’s own processes.

Differentiation: How Leverage stands out in a crowded market

How do you stand out in a sea of Virtual Assistant companies and outsourcing platforms? By offering a completely unique service.

Leverage differentiates themselves from the competition in two very distinct ways:

As you can imagine, Leverage specializes in automation and efficiency-related projects. For instance, a common project Leverage’s VA’s handle is analyzing a business’ hiring process and then helping automate and streamline the process. Need inspiration for a project? Leverage has a Trello board for that too:

Sonnenberg has created an advanced algorithm that automatically match projects with the best VA’s for the task. Customers can opt to have Leverage automatically select the best team member for their project (via algorithm) or the customer can assign a specific VA to their project. This allows customers to work with the same team members they’ve worked with before, if they would like to do so. Leverage also guarantees all their work.

With zero investment dollars, the company has bootstrapped their way to profitability by continuing to look for better ways to help individuals and companies leverage their time. In their own words, Leverage has “evolved into a sleek and highly efficient ally for businesses and individuals” whose “highly trained VAs and team of specialists can handle any task or project that comes their way.”

Soon, there will be a another major differentiator…

Leverage’s “real offering is to make businesses more efficient” and the virtual assistants are just one way to do that. “We’ve reexamined and refined what a business efficiency process would look like and recognized the potential was huge,” says Meisel.

Currently, Leverage is in the process of creating their own project management software. The platform will initially rollout to Leverage’s existing clients. Shortly after, the platform will be available to the public in beta.

When launched, the software will be free and will have virtual assistants built into it.  “Like a to-do list on steroids, where you can simply click a button and have someone else do anything and everything on your to-do list,” says Sonnenberg.

A project management platform with a magic button built-in! For any project on your to-do list, you can simply press a button and have a Leverage team member do the project for you.

They’ve also published a book about the lessons they learned building Leverage: Idea to Execution: How to Optimize, Automate, and Outsource Everything in Your Business. Forbes recently named the book on its list of Top 10 Best Books for Entrepreneurs in 2017.

Leverage co-founders show no signs of slowing down. Leverage remains at the forefront  of automation, optimization, and outsourcing — it will be exciting to watch the company’s continued growth trajectory.

To learn more about Leverage visit them at getleverage.com or join the waitlist for their new project management tool.