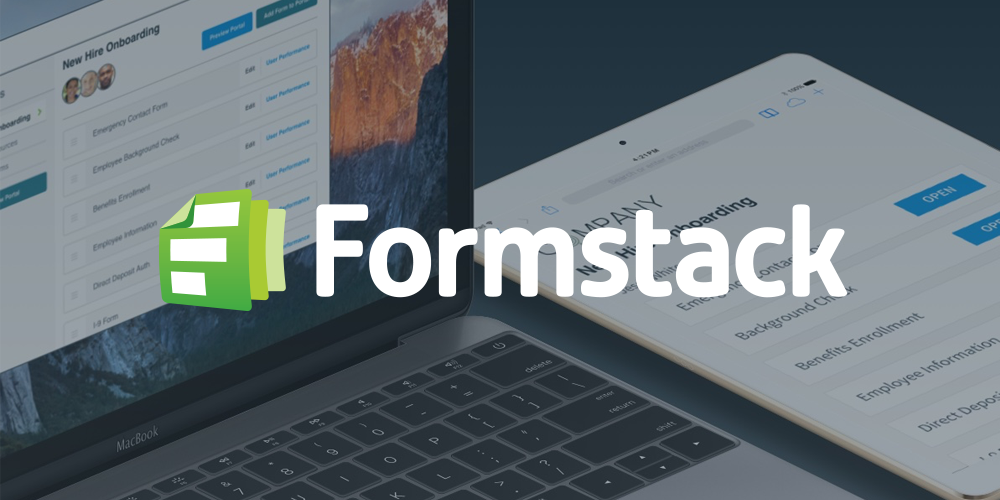 This blog post is part of our Customer Spotlight series. Throughout the series we highlight Chargify merchants and the lessons learned as they grow their subscription-based businesses.

Formstack was born out of a personal need for a simple form builder and had a humble beginning as a bootstrapped startup. Over a decade later, it has grown into a global enterprise providing a variety of intelligent form and data capture solutions built to manage information across an entire organization.

In a world where 90% of startups fail and 70% fail due to premature scaling, what are Formstack’s secrets to longevity, profitability, and successful scaling? We sat down with Formstack CEO Chris Byers to find out.

In 2006, Formstack founder Ade Olonoh was running a software development and consulting business called Recursive Function. Putting forms on clients’ sites was tedious and time consuming, and Olonoh needed a more efficient solution. Formstack (originally called FormSpring) was created to scratch this itch, but he soon made his solution available to the public.

The problem/solution fit was personal and the product/market fit clear when FormSpring saw a more than 1200% growth rate within the first year. While Recursive Function continued to operate, a team was formed to focus on FormSpring. User feedback was used to shape the roadmap, and the customer base grew organically with the help of some inbound marketing.

Since both companies were growing quickly, Olonoh decided it was time to bring in a full-time CEO for Formstack (enter Chris Byers) while he focused his attention on formspring.me.

In our conversation, Byers took us back over the lessons Formstack has learned as it scaled into a successful, global enterprise.

As with any MVP, Formstack’s initial offering was a more basic form product. One of the first steps toward creating a more robust product and solving more complex business issues began when the company started creating integrations with third-party web apps.

Today, tools like Zapier make integrations much simpler, but those tools weren’t available at the time Formstack first began developing its integrations. Getting data into the right systems was very complicated, and Formstack’s integrations relieved that pain point.

The integrations also allowed Formstack to build some very interesting systems that saved customers even more time by making it easy to get their data into backend systems. “We’ve created nearly 50 integrations where you can make sure your data lands,” says Byers.

He estimates 70-80% of Formstack customers utilize Formstack with at least one integration. “Chargify is a great example.”

With the Formstack Chargify integration, Formstack users can add secure, mobile-ready payment forms to their site. For instance:

Over time, Formstack combined integration points with logic on the forms to solve more intricate business problems. For instance, imagine filling out a form that offers different options such as:

Integration points and form logic not only allowed advanced features to be created, they’ve also been an important part of the company’s scaling. Today, integrations and advanced logic remain at the forefront of the company’s goal to continually solve more complex and interesting business problems for Formstack customers.

Determining pricing is one of the most common and critical issues for SaaS companies.

In Formstack’s earliest days, users could access the product for free. As the company moved to charging for the product, initially the pricing decisions were more of a “gut-level response.”

From the beginning, the goal has always been to provide users with a set of pricing options. 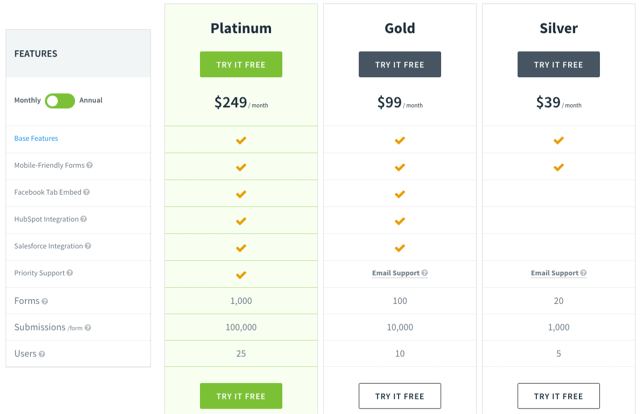 Even as the company has built (and continues to build) a more complex product, providing even more value to users, offering plan choices to users remains a priority.

These days, the company uses A/B testing to help determine the best pricing for new offerings and product improvements.

Chargify makes it easy for us to modify our plan levels and experiment with plan prices.

The lessons Formstack has learned as the company grows aren’t limited to the product. Company culture has been a key element to the company’s longevity and success.

Communication and defining culture become the difficult scaling problems as you grow.

The company’s culture and communication needs are unique because Formstack is based in Indianapolis, Indiana, but it is also a distributed company with employees working remotely across the United States and in other parts of the world.

Byers admits focusing on clearly defining Formstack’s company culture wasn’t something anyone really considered until several years into the life of the company. The time came when Formstack executives determined they needed to write down their culture.

“Most of writing down your culture is about simply documenting history more than trying to create something aspirational. Because, for the most part, our culture came about organically,” says Byers.

First, executives wrote down the values that were important to the company. Then they shared those ideas with employees to determine if they made sense and resonated with the team.

The result “was a series of nine statements that we believe are our culture,” explains Byers. 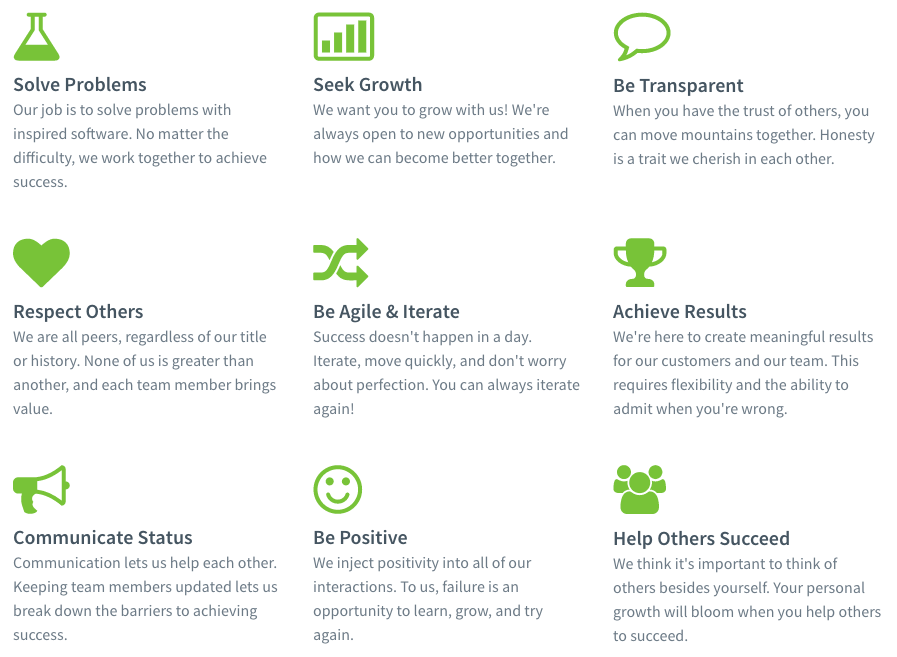 Byers points out Formstack’s culture statements are not permanent and that it’s important for the the company to reexamine them every once in a while.

“The way we think about things as we age and as the company ages begins to morph over time. So I think you do need to be a bit flexible about what culture looks like.”

As the company grew and developed a team spread across the world, executives found themselves asking “How do we keep a sense of what is happening, where we’re going, and where people are running into problems?”

Communication and alignment become really, really important as you scale. They really become the difficulty that you have to deal with.

He goes on to explain that even the problems the company solves have pivoted from mostly solving technology issues to now solving for both technology and communication problems.

“We used to solve technology problems and we still do that, in terms of when we are scaling and becoming efficient, but what we now tend to solve are communication problems,” says Byers.

Formstack built an internal communication tool to keep track of daily standups, team check-ins, and goals and OKRs (Objectives and Key Results). This tool became such a significant part of Formstack’s success, the team eventually made it available to the public as a standalone SaaS product called Jell.

All of these lessons learned were integral to Formstack’s success, but it’s clear the company’s growth isn’t slowing down. Formstack ended 2016 with $9.7M in revenue (an increase of more than $2M from the previous year), and the company has been ranked on the Inc. 5000 Fastest Growing Companies list several times.

Continuous phases of growing a business

Byers explains there are two interesting cycles a business “ebbs and flows” between as it grows:

The first involves being very agile. During this phase, a company needs to be flexible, move quickly, experiment, and rapidly iterate. During this part of the growth cycle, the company heavily utilizes the feedback loop:

“There is a moment in time where you start to see enough success that you then lock into the need to systematize things,” says Byers. Systemization is the second part of the business growth cycle.

For Formstack, that means using tools such as Google Analytics, Chargify, Salesforce, etc. to measure and confirm that products and processes are working.

Byer explains, “then you get to a point where you need to grow outside of that plan and that process so you swing back toward the more flexible.” Examples include pitching a new product idea based on customer feedback or rebuilding a system to optimize efficiency.

I think that iteration continues to happen over time. Business can grow, but eventually it will stall out if you don’t continue to re-aim your product.

Thus, the ebb and flow between the two growth cycles is experienced by all successful businesses throughout the life of the company.

What’s next for Formstack’s growth

In the near future, the company will be updating its own internal analytics. A few years ago, Formstack spent $20,000 building a custom SaaS metrics dashboard for its own systems, but Byers points to Chargify’s recent releases of analytics and reporting capabilities:

The new analytics Chargify recently released are amazing! They’re actually much better than what we had already built for ourselves.
Chris Byers, CEO of Formstack

On the product side, one of the biggest things Formstack is working on is the collaborative form.

“Historically, one person fills out a form and then that data gets pushed to the right destination. But, realistically, we’re all getting more collaborative in our work style,” points out Byers.

Here’s an example. Let’s say you need to interview a series of people about two different topics. With a collaborative form:

“All of a sudden you’ve got this process that used to have to happen via emails, phone calls, and things like that, being automated. People are getting alerted very rapidly regarding the task they need to get accomplished. As soon as they’re done, they don’t have to go through the admin process of getting back in touch with people, it just gets forwarded on to the next person,” describes Byers.

Formstack also plans to be in several new verticals within the next couple years. As the company scales “we need to continue to introduce our product and what we’re doing to more and more people,” he explains.

Within the last year, Formstack’s product has been certified HIPAA compliant, so healthcare organizations are a recent vertical focus. The compliance allows healthcare organizations to collect patient data securely via Formstack forms. “HIPAA compliance allowed us to communicate to the healthcare audience in a new way, because we’re bringing something that’s extremely valuable to them,” says Byers.

Moving forward, Formstack will continue to focus on new verticals by introducing the product to new markets. Each introduction will be built around a key feature (or possibly multiple features) that will solve an important problem for that specific audience.

“The ability to deepen automation and workflow in organizations is a really important task for us, so that we can help them continue to remove complexity from their business.”

To learn more about how Formstack can help reduce complexity in your own business, visit https://www.formstack.com or sign up for a free trial.