In this episode of RevOps and Hops we discuss what revenue operations is, how long it’s actually been around, and why it’s become so relevant today.

You can listen to episodes of RevOps and Hops on Apple Podcasts, Spotify, or wherever you listen to podcasts. There’s also a full video version below so you can pick and choose your own journey. 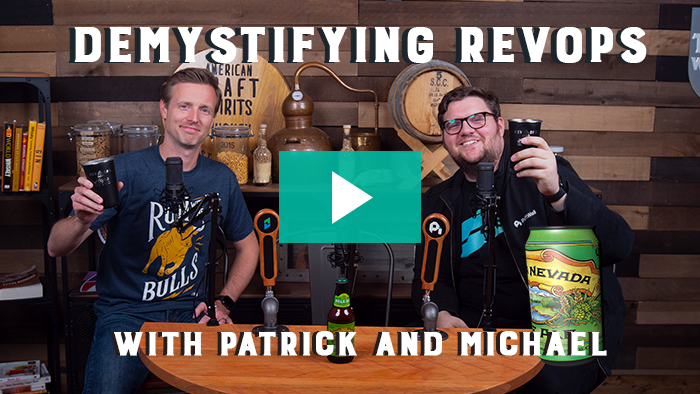 Chargify launched in 2009, and the goal was to help SaaS bill and collect revenue. The reality is, most SaaS businesses are experts in something else, but billing isn’t one of them.

As Michael was starting Chargify 10 years ago, he also caught the brewing bug. He’s always been passionate about beer—a hobby that requires patience and a well-trained palate—so he decided to learn how to brew it himself. “What better way to learn something, than to make it yourself,” he says.

A fascination with problem solving is what led me, Founder and CEO, to start ProfitWell in 2012. ProfitWell is not only a platform, it’s also a team that plugs into subscription management systems like Chargify and performs revenue automation activities. This can range from help with pricing, retention, and churn, as well as providing subscription financial metrics so a customer can see everything that is going on from acquisition all the way through to retention.

Building products that solve the most complicated subscription-growth problems—I’m on a mission to find that subscription truth.

What is Revenue Operations?

Revenue operations (RevOps) has been taking place inside of businesses for a while, but we’re finally putting some nomenclature and centralization to the function. Organizations all have their own operations teams: sales operations, marketing operations, and even customer success operations. What Revenue operations is doing, is bringing all of those teams under one roof and on the same page in order to focus on revenue. Because revenue is not only coming from acquiring customers, but also from monetizing them and then ultimately retaining them, long term.

RevOps isn’t necessarily cookie cutter today. Whether there is a dedicated team or not, those that have it in place see it as a central function. What you don’t want to have are those sales and customer success teams becoming siloed and measuring themselves against unnecessary metrics that don’t affect the bottom line of the business, which is revenue. Focusing on revenue as the metric, will help align these teams and work together toward a common and clear goal.

Before demystifying RevOps, we need to demystify hops, and the pun is intended.

We begin with what Michael calls, the granddaddy of the craft beer revolution—Sierra Nevada, one of the original disruptors of the beer industry. Sierra Nevada debuted at a time where light pale lagers were dominating the industry. The beer came from a home brewer who was experimenting with hops and wanted to expose people to new flavors and hops. Said hops came from a new cultivar out of the Pacific Northwest called Cascade. They, most notably, have a robust pine and citrus flavor balanced with a sweet caramel nuance that sets the beer far apart from the typical light lager.

Despite the craft beer revolution, the number of breweries in the United States was actually rather low. Pre-prohibition there were 1800 breweries. Post prohibition, and right up to the 1980s, there were only 90 domestic breweries. Arguably, if it wasn’t for Sierra Nevada, the craft breweries we see today, wouldn’t exist. Sierra Nevada is the spark that lit the beer revolution. Today, there are over 7000 craft breweries in the US.

Is revenue operations a new thing?

The SaaS world has a tendency to shuffle around semantics and buzzwords. So, where does RevOps fall under? Michael argues that some form of revenue operations has been around for a very long time, there just wasn’t a name for it.

There are probably a lot of business concepts out there that are just common sense. But there is something to be said for taking a best practice, that is often seen as common sense, and putting a name to it and framework around it so a dialogue can be created. It’s very easy for companies to start to silo their sales team from the customer success team and the marketing team. We lose that interorganizational connection. We need to have a common language, and terminology so we can communicate effectively.

Why are we talking about revenue operations, now?

A lot of the reason RevOps is so prevalent right now is due to the fact that companies are hiring specific revenue operations roles. Job titles with the term revenue in some shape or form—Chief Revenue Officer, Head of Revenue Enablement—have grown dramatically in the past couple of years because businesses are hyper focused on revenue.

If there isn’t someone or a team in place who is bringing the different functions and teams together, Michael says, “You’re missing out, you have inefficiencies.” Today, we have recurring revenue which is focused around keeping that customer long term. It’s no longer a single transaction between the customer and the business.

Will revenue operations be overpowered by sales operations?

While we do see marketing and sales essentially on the same side of the game, if you measure marketing by the number of leads they generate, and as you get further down the pipe, the sales team says those leads were essentially “crap,” then that is a disconnection, an inefficiency, and a waste of time and money. There needs to be someone in place who is looking at that disconnect and is trying to fix it.

Why aren’t more people doing it?

Michael brings up the point again that RevOps isn’t necessarily a new concept, but it’s the fact that we are giving it a name and a framework.

The function of revenue operations is pure common sense, so why aren’t more people doing it? Michael thinks that sometimes a business just needs permission to get out of their silos. A lot of it has to do with pricing which in turn, leads to revenue. A business might know they need to change their pricing but they have so much inertia and they’re afraid to take the wrong step. In essence, when ProfitWell works with an organization to change their pricing, they are somewhat providing that permission.

I believe there are confidence gaps in a SaaS business, and one of them is pricing. There is no hesitation when it comes to addressing a problem like a bug in the engineering stack, or refactoring an entire feature. Yet, when it comes to pricing, we tend to shy away and make excuses. A lot of the reason is because it’s central to the business, it involves multiple stakeholders and it’s an incredibly public process.

How do you measure revenue?

If you are going to have a revenue operations approach, and subscribe to having revenue as the number one metric in your organization, there has to be a way to measure that. Michael and I both agree that the best measurement for that is Monthly Recurring Revenue (MRR). MRR is the metric that all of those different teams can look at.

MRR is the best metric to use when you are first building your business. Expansion plus net new is where you should start. But as you get further along in your organization’s life cycle, it gets more complicated. It’s all dependent on the business, so sometimes margin is important, or LTV could be the key metric, etc.

There is no doubt that all of these metrics affect each other and they come from different sources (sales, marketing, customer success), but being able to have centralization, and a person focused directly on revenue can bring these teams together and point out where they are not aligned. Start by nominating someone to serve that function—someone that has a lot of context around sales and marketing—to bring about the necessary alignment toward a common goal.