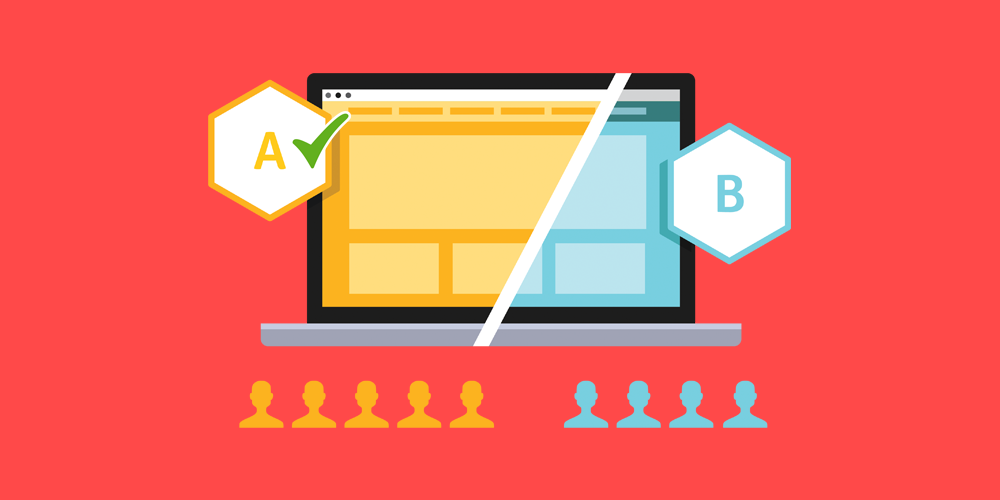 Determining the right SaaS pricing strategy and offer is mission critical for SaaS success. A lot of attention is given to determining the right offer for startups, but more mature SaaS companies should never consider offers as set in stone. Which is why every SaaS company, regardless of where they are in the business life cycle, should utilize SaaS price experiments.

“Given the dynamic pricing environment, the most effective way I’ve found to pursue the right pricing is to test constantly and then compare different prices’ effectiveness at maximizing customer lifetime value,” advises Tomasz Tunguz.

A lot of people fear changing pricing too often because they think it will scare away their customers. And for some—that might be true. But never experimenting with your pricing means you may never learn the value of your product and its potential for growth.

Does experimenting with your pricing seem too risky? It doesn’t have to be. In today’s post, we’ve broken down 5 actionable tactics to help de-risk pricing experiments.

One quick note before we jump into how to take the risk out of SaaS pricing experiments:

We can’t stress how important it is to have accurate analytics and metrics in place! You can’t judge the impact or success of your price experiments without them. Some advice from Chargify’s Marketing Director Adam Feber: “If you can not recite keys stats such as conversion rates, activation rates, churn, average revenue per account (ARPA), lifetime value, etc., then start there before you do anything!”

We’ve previously shared this image in our post SaaS Customer Success: The secret to reducing churn and increasing MRR and it is a good reminder about the importance of customer retention in this context, as well:

Pricing is very sensitive! You shouldn’t impact your existing customer base until you’re confident about what pricing experiments are successful (and which are deemed failures).

“You have to start engaging with your existing customers long before you ever change the price tag on your software. Send out surveys and ask them if they’d be willing to pay more for specific features or new offerings from your company,” writes Cara Hogan.

For instance, Groove discovered the pains of one of their initial pricing plans after getting feedback from paying customers:

“As we talked to more and more site visitors, something we should’ve known all along became very clear: our pricing model was ridiculous. It was overwhelming, and made the decision to buy from Groove a complex one,” explains Alex Turnbull, CEO of Groove.

Based on the feedback from their paying customers, Groove experimented with other pricing structures for new signups. The company also surveyed site visitors to continue to move towards determining the best pricing for their SaaS. Ultimately, Groove stripped down their pricing to the most basic, simple form with “One single price. Everything included. No extra charges. 14 days free:” 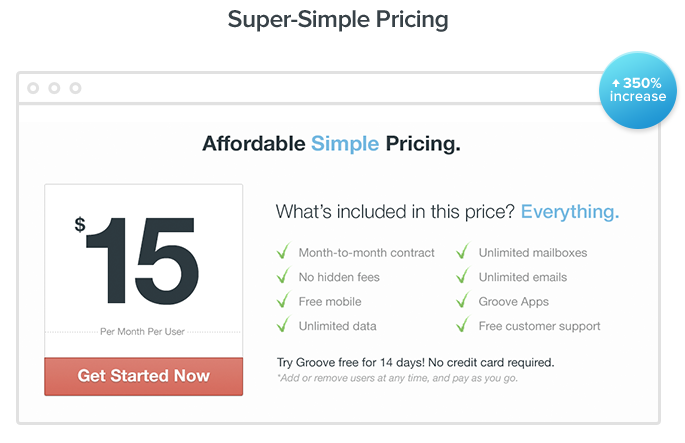 After launching the updated price for new customers, Groove immediately “began to see conversions rise — more than 350% over the previous model!”

Again, we aren’t suggesting you test pricing on your current customer base. We are, however, suggesting you de-risk your SaaS pricing experiments by testing prices that are more closely calibrated with your existing customers’ usage data.

This pricing experiment strategy is more complicated, so let’s look at a real-life example:

Project management app Planio analyzed “the distributions across the various criteria that make up [their] plans: number of users, number of projects and storage space.” Here’s what their pricing plans were at the time of the analysis:

When they compared existing customers’ usage to their pricing plans, “there was a clear disconnect,” writes Planio growth marketer Thomas Carney. Based on the number of users per account:

The company determined the disconnect was that teams with 7 active users were paying the same as teams with 30 active users. “Our conclusion was that our pricing scale was not calibrated to our customers’ behavior.”

They created new pricing segments based on the data points discovered in the usage analysis:

The new pricing test was only applied to new signups, and it resulted in a 100% increase of the average MRR (Monthly Recurring Revenue) per new customer.

Optimizing plans based on usage/consumption can not only increase new business MRR but will also lead to expansion MRR down the road. Check out our post on Future Proofing: How To Model SaaS Pricing For Expansion MRR to learn more.

Mathilde Collin wrote a great blog post that outlines how running Front’s frequent pricing experiments and testing on small cohorts has become a “secret weapon” in the company’s growth.

“We went from iterating once a year to once every three weeks. Now when we make changes, we compare the new cohort to the previous ones: if the cohorts behave similarly or the new one is even better, we stick with the new pricing plan. If not, we just roll back to a pricing structure that’s worked well previously,” writes Collin.

During and at the end of every experiment, Front pays particular attention to:

The trick with more frequent, constant testing is to make small, incremental changes more often so the public-facing impact goes almost unnoticeable. Sure, the end result from running 10 different small pricing experiments vs. 1 larger pricing experiment may yield the same results, but you’ll learn a lot more about your paid conversions and what they are willing to pay for along the way.

Collin said by testing on small cohorts, “there are fewer repercussions for totally screwing up. So instead of making big, infrequent jumps in our pricing, we evolve our pricing little by little at a steady cadence.”

A/B testing is particularly popular in SaaS marketing, but it gets mixed reviews for pricing experiments.

If you’re an early stage SaaS company, Tunguz points out your company likely does not have the “key ingredient to A/B testing — huge amounts of user traffic.” He shares the screenshot (below) from Optimizely:

“To detect a 20% change in a target metric with 90% confidence if it happens to 3% of visitors requires 12,000 visitors per test. In other words, the AB test require 24,000 visitors to test two variations,” writes Tunguz. The majority of early stage SaaS companies don’t have that kind of volume.

A few of the additional issues other critics bring up (applicable to early stage and mature SaaS businesses):

Some A/B testing tools will allow you to enable IP Targeting in A/B tests, which ensures contacts on the same IP see the same test/price. Unfortunately, if they’re in different office locations, are using their home computer, or viewing your pricing on a mobile device, the IP targeting won’t be of assistance.

CXL Growth Marketing Manager Alex Birkett suggests one way to A/B price test with less risk: A/B test two different pricing pages, but when prospects click to signup everyone is taken to the same (lower) price at checkout. While this tactic might not be for everyone, it’s a de-risked way to gather purchase intent data without angering those customers paying a marked up price.

For most SaaS companies, you should have plenty of historical data for current plans. Running a new pricing experiment for all new sign ups and comparing the new metrics to historical baseline metrics is the easiest and cleanest way to test new pricing and offers. Just make sure you’re accurately tracking all the necessary metrics.

The worst thing you can do is just to set-and-forget your pricing. You need to treat it as a constant work in progress – your pricing strategy will never be perfect because your competitors, the business environment and your customers’ requirements change over time.

While price experiments can seem scary to many SaaS companies, by utilizing some of the actionable strategies we’ve laid out in this post you can de-risk your pricing experiments and continue to work towards the revenue optimized price points.

Now it’s your turn: what does your SaaS company do to de-risk your pricing experiments? Let us know in the comments below.