8 Things to Consider When Rolling Out Usage-Based Pricing 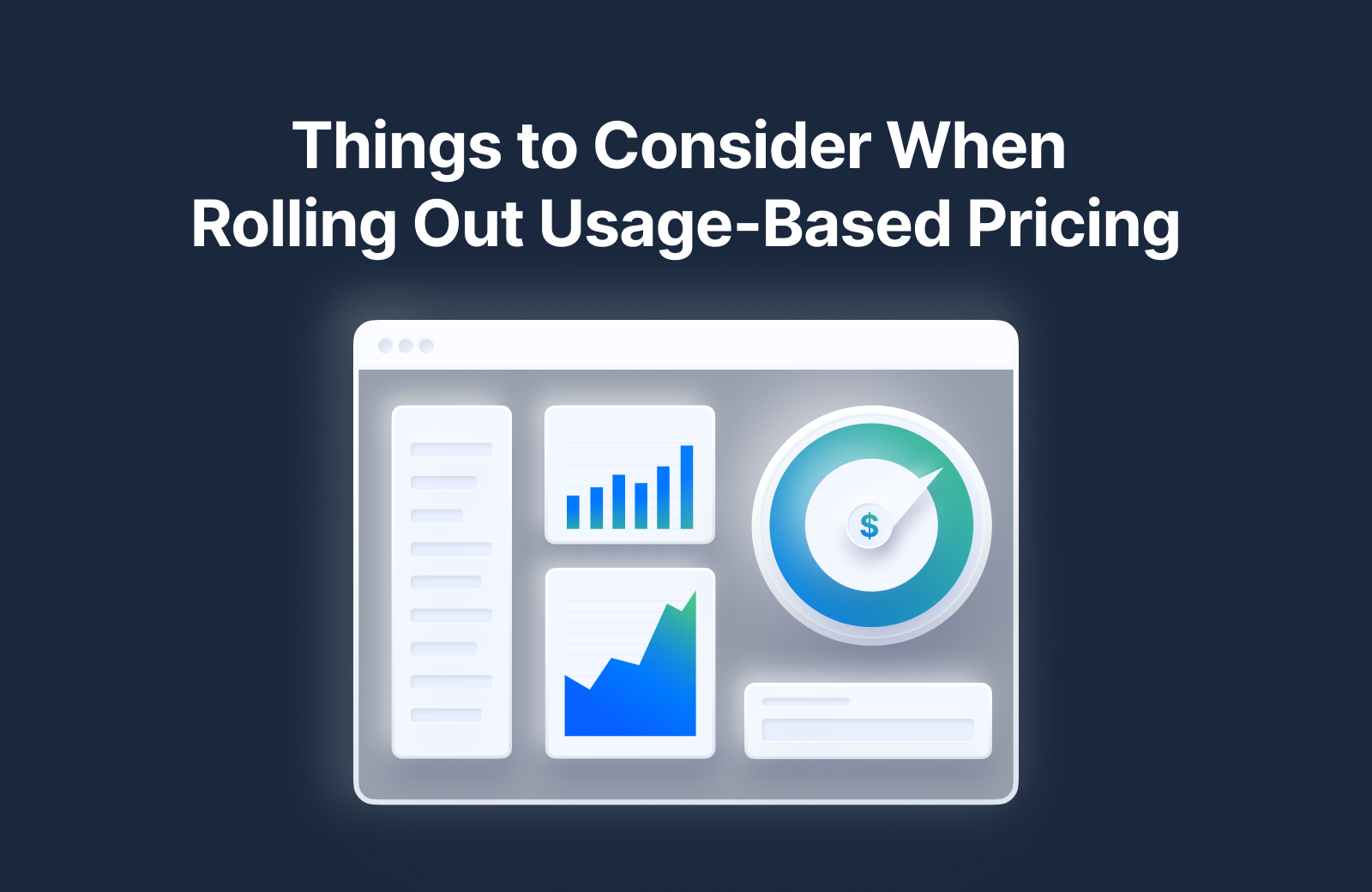 The momentum behind usage-based pricing (UBP) is real and justified. Openview reports that 45% of SaaS companies have deployed some form of UBP and a staggering 61% plan to do so over the next 18 months. Why such momentum? When executed well, UBP allows for near-frictionless growth in the installed base and is one of the best ways to drive Net Dollar Retention (NDR) and your company’s valuation.

For those beginning the process, you likely already realize that pricing changes of this sort have implications for virtually every corner of the enterprise. However, the challenges are not insurmountable, and many firms have successfully moved to UBP for some or all of their products. The checklist below leverages the experience of firms that have already made the transition and was developed from direct interviews with CFOs, pricing consultants, and survey data from a variety of sources.

Like any checklist, it does not contain an in-depth analysis of how to solve each issue. Its value is in making sure all the various aspects of UBP are identified up-front when they are easier to address.

The hardest part of launching Usage-based Pricing (UBP) is finding a good metric or two that aligns customer value with their usage and will provide revenue growth opportunities. Pricing experts suggest tracking a variety of metrics to learn their patterns and correlations before landing on your choice.

In a survey by investment firm Coatue of 170 UBP SaaS companies, the pricing metrics listed in order of popularity were:

James Wood, the pricing expert at Insight Partners, also reminds folks, “it’s unlikely to find a silver bullet metric,” and your business might require a variety of usage metrics. In addition, there is a real possibility that your business is not a fit for UBP.

Don’t do anything else until you have found a set of pricing metrics that you think will align customer value to costs and will grow over time. If UBP does not result in organic growth, there is no compelling reason to roll it out.

Across several surveys, the number one impediment to implementing UBP was finding the right metric(s). The consistent number two impediment is finding the systems to support UBP.

Many traditional SaaS billing systems might be the least capable launching points for UBP. SaaS subscription pricing is generally fixed, and finance systems were purpose-built to handle static subscriptions. As such, many SaaS finance systems do an excellent job dividing by twelve, but not much else. In UBP, however, there are two unique operations that need to happen: 1) near real-time pricing calculations and 2) delivering the invoice and reconciling payment.

Pricing calculation combines pricing rules with unique customer metrics to calculate the monthly bill. It sounds simple but involves a high volume of data stored in a granular, time-series fashion and requires full transparency back to the customers who want to see how their bill was calculated. If the pricing involves multiple metrics, tiers, or special deals, the complexity typically results in a gnarly spreadsheet buried somewhere in the finance department.

Pricing calculations also need to be performed each day at a minimum. Both customers and your own CS organization need to see where usage is headed well before the end of the month.

Billing itself is complicated, especially when dealing with multiple payment options across multiple jurisdictions and with credits and chargebacks. Most billing platforms do not have the functionality to perform both UBP pricing calculations and all the other billing operations.

Depending upon your customer count and pricing plan complexity, some SaaS companies may get away with spreadsheets for a bit, but ultimately most UBP deployments will require purpose-built price calculation capability, which may be embedded in their billing system, or done in a separate system.

Traditional SaaS subscription businesses were some of the easiest to forecast. However, UBP SaaS businesses are historically difficult to forecast. Even the public UBP SaaS companies get it wrong despite devoting a lot of time and energy to the problem. One public SaaS company has about 30 people working on their forecast each quarter.

There is no simple answer to UBP forecasting other than recognizing that one of the “costs” of UBP is less predictability. Finance teams need to educate their other stakeholders that the model carries more variability than traditional SaaS. In most cases, the higher NDR and growth unlocked by the pricing model more than offsets the lack of predictability it creates, but it does come with the territory.

Experienced UBP CFOs forecast in an “extra conservative” manner due to the variability, and they lean on long-term revenue trends over sales forecasts out of the CRM.

This topic is worthy of a short book, so I will just briefly highlight it here. Traditional sales-led compensation structures that pay a percentage of the first-year ARR do not fit well with UBP models. Companies have tried to solve this with two basic approaches: 1) pay salespeople in arrears based on a set period of customer billings, or 2) pay salespeople at the initial closing based on estimated usage over time.

Getting sales comp wrong will result in either sales rep turnover or substantial over-compensation. One public company CFO anonymously disclosed that they paid a rep $6 million in commissions on one account before they refined their sales comp model to better align with usage and the rep’s contribution over time.

Customers will have a lot more questions about their bills, and you will need to have a self-serve way for them to check the basic facts. Customers will expect to be able to “drill down” on the bill at any time to see where they are spending money.

Also, alerts for high-spending customers need to be established quickly. If your best customers get an unexpectedly high bill out of the blue, you will pay a heavy price. If, however, you are proactive in those situations, it is an opportunity to increase trust. Proactively reaching out to help a customer lower their bill is a powerful and positive interaction.

Many of the most successful UBP SaaS businesses have only one customer-facing organization that continuously works with each customer along their journey. There is no hand-off from Sales to Customer Success. Snowflake calls everyone salespeople and Atlassian calls everyone CS people, but the result is the same. This structure makes a lot of sense for PLG businesses with high land-and-expand intentionality.

7. Revenue and Cost Recognition for Services

Revenue recognition for UBP products themselves is pretty straightforward and aligned with billing, which is typically in arrears and based on actual customer usage. If, however, up-front implementation services are performed, it’s not easy to know over what time period to recognize the associated revenue. Likewise, the amortization of sales commissions under ASC-606 has the same ambiguous timeline problem. It would be best to consult a specialized 606 accountant to discuss this issue before a roll-out.

Two things will be working against your cash flow as your roll-out UBP. First, most UBP billing is monthly in arrears as opposed to annual in advance as it is for many subscription products. You may choose to pre-bill and establish “credits” that are consumed over time, but that’s a relatively complicated undertaking. The shift in billing will have a big impact on cash flow if you are shifting existing customers to the new model.

Second, most UBP roll-outs will result in a lower initial revenue booking (ASP), and some may also result in pricing compression within the installed base. Compression is particularly acute if you are launching a freemium or low-cost version of your core product. Several VCs even recommend preemptively raising cash before attempting a large-scale transition to a UBP or PLG strategy.

Any deployment of UBP, whether across all products or just associated with one, generates a variety of operational issues which should be thought through prior to the roll-out. Most of these issues fall upon the finance department to address and resolve.

Everything on this list is manageable, and most SaaS businesses will not need to deal with all eight at the same time. Start the process by finding the right metric(s) and progress forward from there. Sales-led businesses will have an advantage in the roll-out because they can experiment with pricing without exposing it to the entire installed base or all new prospects.